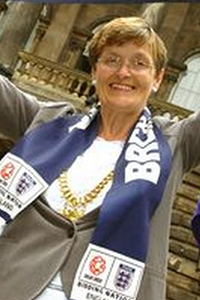 Former Lord Mayor of Liverpool Hazel Williams is to stand in the Garston and Halewood Constituency which includes parts of both Liverpool and Knowsley.

As Lord Mayor, she led the cities anti-austerity march and was lambasted by Lib Dem Lord Storey for doing so.

She has a wealth of experience in developing social enterprises.

Hazel is the Treasurer of the well-respected community, the Tuebrook Hope Group.