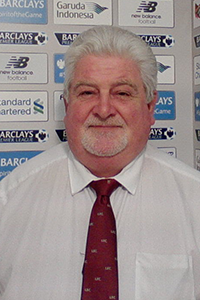 Raymond Catesby who is the candidate for Knowsley.

Ray Catesby has been a national adviser on designing out crime and combating terrorism working with Local Councils, Housing Associations, Police Forces , Home Office and the UK Crime Prevention Centre.

He has lectured on Crime Prevention through Design across the UK and abroad.

Ray was born in Toxteth, qualified in Architecture at Liverpool Polytechnic and worked in Liverpool for over 20 years and then progressed into crime prevention work.

Ray is a keen sportsman, he has stewarded at various stadia including Liverpool. Everton, Widnes St.Helens and Chester.

He played a key part in the community campaign to secure junction 8 on the M62 and believes it is vital to Knowlsey and Merseyside to develop good public transport infrastructure .

“I would switch funds from HS2 into local transport projects”.

“I deeply object to the tolls being charged on the Runcorn Bridge and Mersey tunnels unlike other parts of the country” Ray Catesby.

Ray has family history in politics having had 5 family executed for treason including Robert Catesby for his part in the gun powder plot.

I am adamant we should have free TV licences for the over 75’s.